Intranet Book: The Company Happiness Index as a Mood Barometer

We have elements built into our intranet that are designed to improve transparency, collaboration, and cooperation. These include an anonymous satisfaction survey that all intranet users can complete. I should mention here, however, that only employees are active on our intranet. We have a separate system for external parties: our extranet. Our internal system is protected from the outside by a firewall.

This system allows colleagues to show their satisfaction with their team and the company as a whole on a scale of one to five. They can also describe what factors have influenced their mood either negatively or positively. Here’s a screenshot of the survey screen: 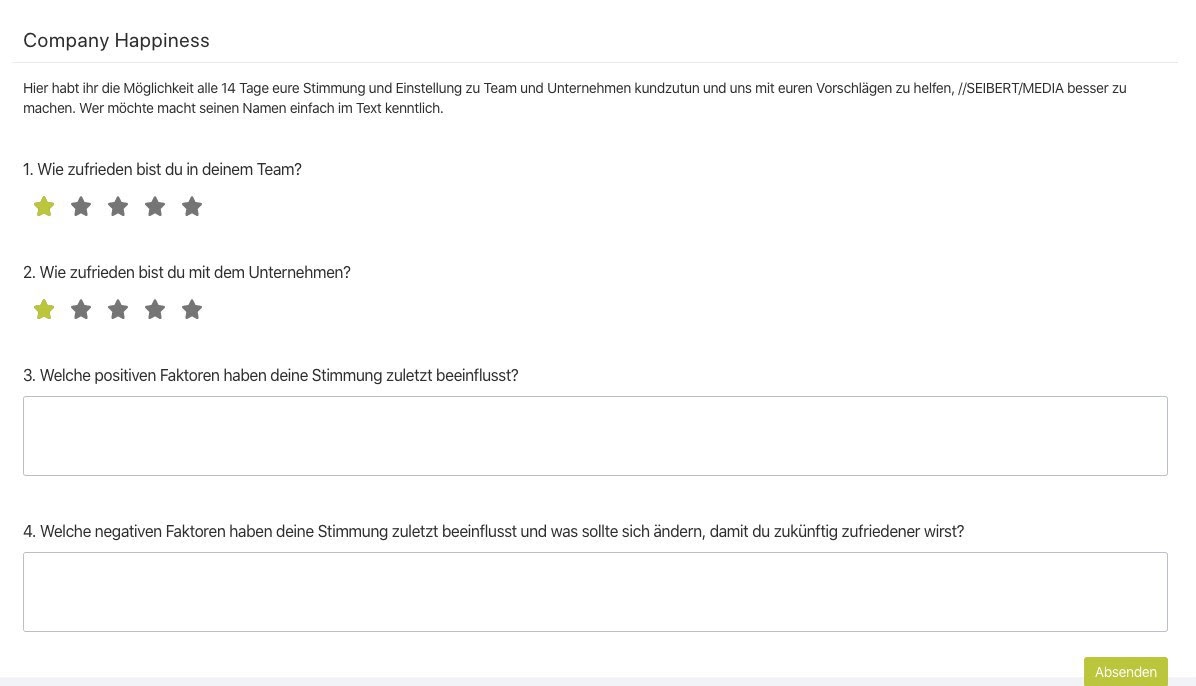 People can rate their team or company satisfaction (1&2). They can also add comments about what has influenced them positively (3) or negatively (4).

In order to be able to see the results, the user has to fill out the form. About a third of our people take part in this 14-day survey. After another 14 days, your vote expires.

These are the results for our company: 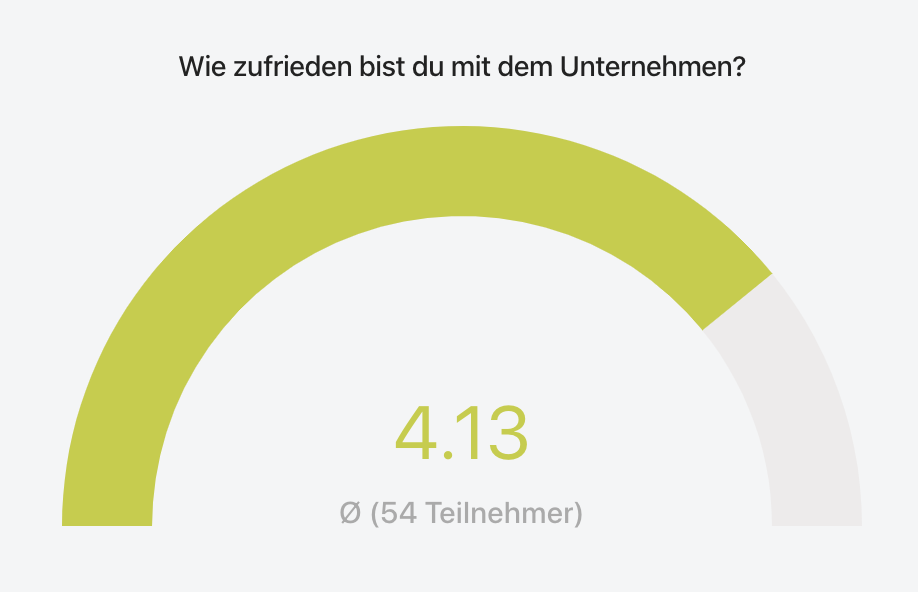 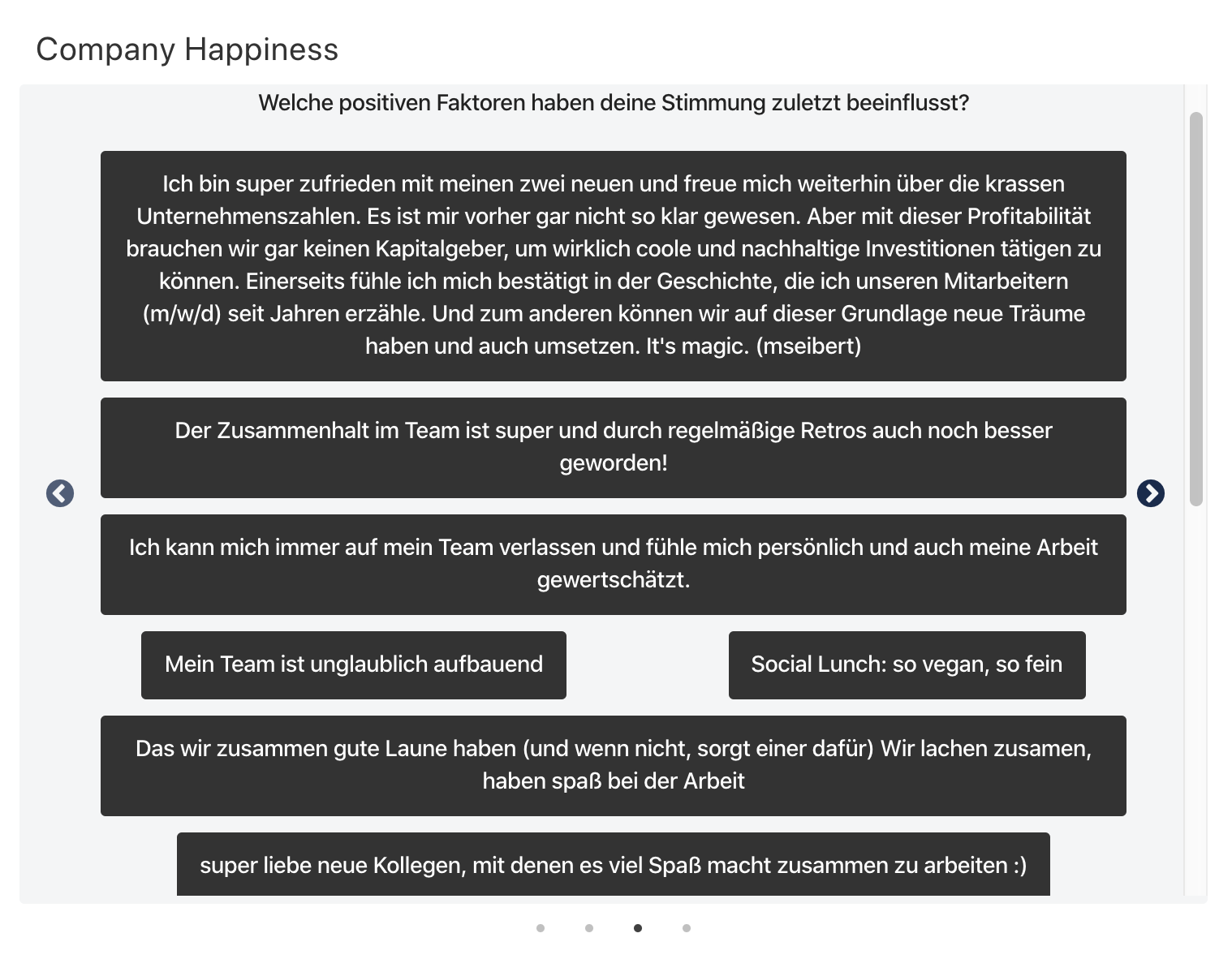 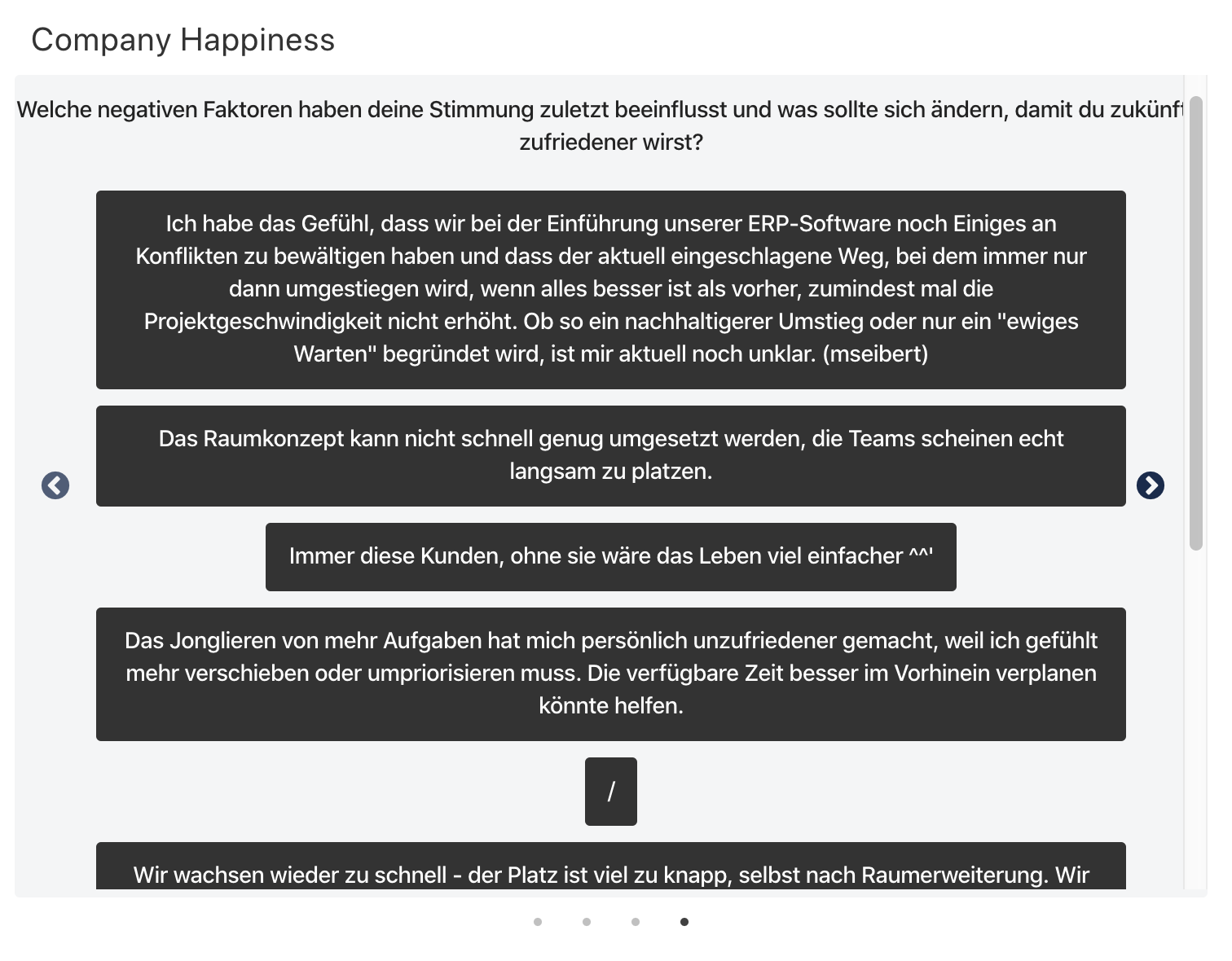 We have a time series analysis for these snapshots: 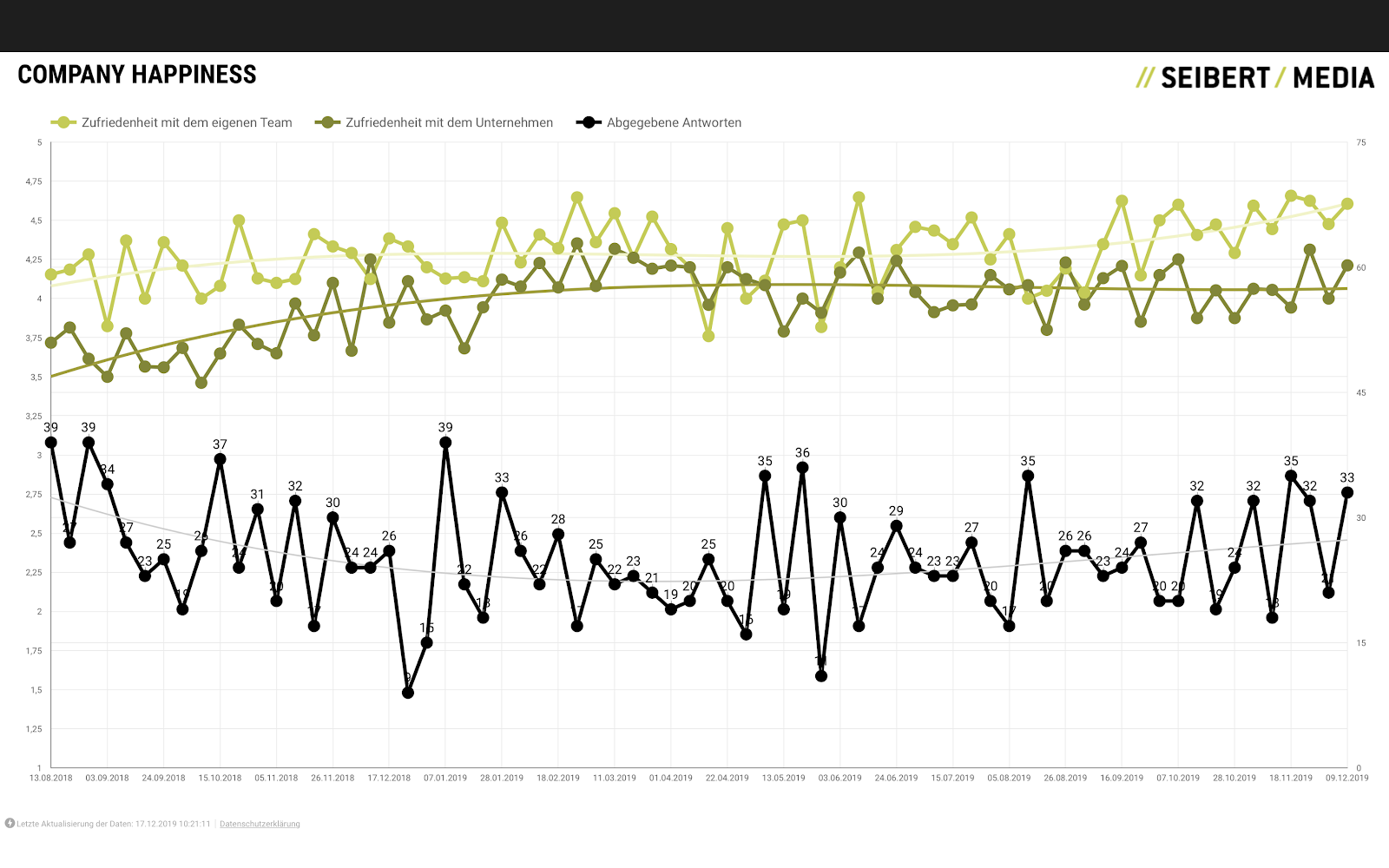 I was just thinking for a second about whether or not I should share this with you. In any case, you shouldn’t see it as an unreserved recommendation on my part. This survey format presented us with some really enormous challenges from the get-go. I remember the case of a colleague who had just taken on a management role. About a week later in the survey, someone wrote the following anonymously: “Department PO (for Product Owner) was the wrong appointment.”

This and other similar remarks on other topics don’t allow for discussion due to their anonymity. And initially, that led to me strongly rejecting the tool. I thought anyone who’s incapable of offering an opinion personally and in their own name doesn’t have a relevant opinion to offer. It sometimes felt like we, as an organization, were cleaning up the ugly graffiti left by drunks at night. Not a pleasant task. And this leads to the temptation to simply abolish the survey as a platform or perhaps eliminate the anonymity that caused the problem.

This satisfaction survey has been the subject of an ongoing discussion at our company. And even though I don’t have any problem being the butt of a few occasional anonymous remarks (though these have become rarer now due to some changes we made), anonymity still causes us a lot of head shaking and frustration.

A common question, for example, is why do we want to tie ourselves down with this when we could just as easily just discard the anonymity? I’m talking about this tool here because I suspect that you’ll face similar questions in your organization about other topics sooner rather than later. You may be asking yourselves why you should go through the trouble of putting a wiki on the intranet and burden yourselves with the task of establishing a new form of collaboration when you can simply settle the problem with a mobile app and some curated news from management. Who wants to create extra work and stress for themselves?

In fundamental terms, I’m a real fan of iterative approaches and bite-sized tasks. There’s nothing wrong with just starting with the news and app and then tackling higher and more transcendent forms of collaboration later on that really change the transparency in our company and the way in which we cooperate. I think it’s the right approach. Lots of our customers do it the same way. You should just make sure that your system still has room to grow once you’ve completed all these simple bite-sized steps.

For us as a company, our anonymous employee satisfaction survey was probably the perfect challenge. Internally, we talk of ambiguity tolerance when it comes to countenancing clear contradictions with tolerance. Which is not easy. Someone posts something that in my belief is a combination of obnoxious, wrong, and harmful, and as a company, we propagate this opinion by prominently displaying it on our intranet. That’s a little bit crazy, isn’t it? None of our customers would ever allow this to happen.

And yet it still has many positive effects. I can spend all day thinking about what made them write things like that in the first place, which is not much fun. And I often catch myself thinking what I’m doing is a complete waste of time. In what feels like 80 percent of all cases, I understand after a few days how the comment probably came about. Then I also understand that the alleged smear is a more or less constructive attempt to stimulate change from the author’s point of view. And, of course, the person wouldn’t dare post it if their name was underneath and could be seen by everyone.

However, that’s also the actual value of the matter: we get feedback that we wouldn’t usually get in normal circumstances and we can work with that.

As I said, if you don’t want to hear any feedback, or know what your present challenges and problems are anyway, you wouldn’t want to use a tool like this.

Our anonymous satisfaction survey taught me a lot about tolerance for ambiguity. Now I’m much better at just leaving things in the room than before. I don’t always have to shout immediately, “Stop! Not like that! You can’t say that!” And as a rule, this usually concerns the opinions that people actually express. They’re always true. Perhaps they’re sometimes motivated by malicious intent. Maybe their comments are incomplete or illogical. Maybe they formulated them badly or perhaps even deliberately provocatively. As an organization and as a person, however, being open enough to endure this is healthy and strengthens resilience. You don’t have to follow every trend, and you can face up to a mess with a certain amount of vulnerability without leaving the field as a loser.

Yes, I freely admit it: a survey like this is a little borderline. And we still find ourselves in the experimental phase. It’s a little bit like the frosted glass fridge. Things work out completely differently than you expect. It may also give you an idea of how we design our experiments. And the risk is really not that high. Someone spits out some bile that remains on the intranet for a few days where others can read it. My goodness!

By the way, we’ve since introduced some measure of censorship. All entries are now automatically sent to our agile coaches who moderate them and remove unsuitable posts from the survey with a click of the mouse. They’re only meant to do that if personal attacks occur. And in the past twelve months, that hasn’t been the case. Maybe we’re special. But I don’t think so. If you find yourself hesitant to experiment, it may be that your organization lacks a solid belief in the people who work for it.

Personally, I’m sure that you’ll also benefit from experiments at your company. Just don’t start with the one I just described. On the other hand, if you’ve already thought ahead and know that no one can fool you when it comes to agility, then give it a try. Whatever the case: you’re certain to learn a lot.

Foster collaboration and strengthen communication. Be effective with enterprise intranets mobile and in the cloud.

Virtual Collaboration in Companies: Social Intranets as a Digital Home

Never before has the business world been so overrun by cloud software and specialized vendors as it is now. There is so much software out there that it is becoming increasingly difficult to keep track of things. It is all the more important for the future of work to have a place for digital meeting - a reliable home port meaningfully networked with numerous other systems that makes it quick and easy to navigate. This will increase transparency in the company and make collaboration more effective. Based on many years of experience, this book tells you how it already works in today's digitalized world and which trends you probably should rather than shouldn't follow.

Martin Seibert was 17 when he founded the software company Seibert Media. Twenty-four years later, it has nearly 200 employees and generates 35 million euros in annual sales. He has been sharing his enthusiasm for technology in YouTube videos for many years - and now also in his new book about social intranets.