In order to foster innovation in companies, room is needed for testing to find out how you can use the intranet as a nucleus for new ideas.

Where do innovations in a company come from? Answers to this question could fill entire bookshelves. Unfortunately, I haven’t dealt with it in theory much, so I don’t know much about it. Experience has taught me, however, that innovation in organizations mostly means standardization and digitalization: this should make business processes better in quality, more efficient, and more effective – and preferably all at the same time through some sort of digital magic.

How Good is a New Idea? Microblogs and Group Chats as a Quick Benchmark Test

In the beginning, innovations are like delicate seedlings that need protection and care until they mature and are strong enough to withstand even the most established of old, bad, and outdated routines. You and your intranet team can help to open up a space for discussion and growth of these micro ideas while soliciting suggestions for improvement.

If you get up early enough, you can kill even the very best idea in a company before it can develop. In this respect, a room that every employee can look into represents a great asset for newly developing ideas like these. Such wide exposure can protect ideas against overly harsh and rough attacks by placing politically motivated skeptics uncomfortably in the public eye.

Or to outline the situation clearly, it’s not the job of your intranet team to create innovations in your organization or ensure that your organization produces innovative results. Yes, it may be a consequence of their work. But nobody can seriously make a promise of it.

What an intranet team can do with an employee portal is establish a space where ideas can be created, documented, and discussed.

If you perceive innovations as small, incremental improvements to existing business processes that add up to a large, impressive change, then a modern intranet can be a central location where these innovations can take place.

Let’s go through an example based on an actual experience. We recently visited our business partner Google at its headquarters in Dublin. There, they have drinks refrigerators, some of which have frosted glass fronts. The top two shelves are transparent, while the bottom shelves are shielded by frosted glass. I was surprised at this and asked why. The person I asked said, “The consumption habits of people can be influenced by how products are positioned. Let’s say I’m thirsty. I go to the drinks fridge. I see water. I drink water. If I see a Coke, I may have a Coke.” 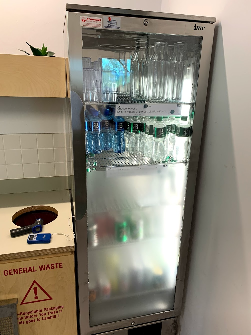 The sodas behind the frosted glass are not visible.

We then continued on to the meeting room. The door had a sign on it: 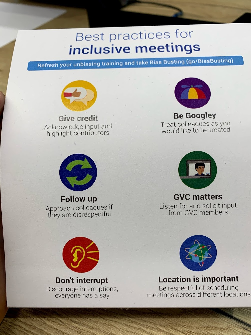 At first, the sign seemed somehow superfluous. That all seemed pretty obvious to me. But I also understood that it was meant for people who are not as extroverted as I am. And in a way, I liked it.

Another thing that struck me when we visited the Google headquarters was that the Wi-Fi is free for visitors. There’s no password, no need to register. You can just start surfing away to your heart’s content. We could discuss this approach for a long time. There are arguments both for and against it. But by now I was thinking: “wow, they’re pretty innovative here. We don’t have these three things, for example. Why can’t we be this innovative?”

At the end of the day, of course, these are just little things. It doesn’t make Google a better company and it certainly doesn’t change the world. But all of these little things add up to a bigger picture. And in the end, people are needed who are the cause of these changes, who implement them, and who stand up for them if they receive criticism.

If the decision-making structure in your company is strictly hierarchical, it probably doesn’t make sense for senior executives to address issues like Wi-Fi passwords, meeting rules, and frosted glass. But an intranet can help to test, evaluate, and implement small-scale ideas like this without having to involve the management – and with a measure of transparency that allows you to escalate it at any time and find out if someone has concerns about its implementation.

My example of how Google inspired me shows how to address ideas when you have an intranet that functions well. I saw a partially frosted fridge door and could well imagine our fridges also supporting a “water first” culture. I decided I would test the idea in the Google chat room we have for our shareholders. While I was waiting for a train at the station, I casually typed into the mobile app, “Anyone remember the fridges at Google in Dublin? I’d also like to put frosted glass film on ours and put the water at the top. What do you think about the idea? Shall I suggest it to our office team?”

The answers didn’t take long. “Sure, why not” and “It’s not that important to me, but if it can be done quickly and cheaply, go ahead and ask the team.” I don’t know whether my colleagues wrote their answers on their phones or on their computers, but after a few seconds I had confirmation that my idea was probably not an act of complete vapidity that I would be ashamed of later because everyone thought, “so that’s what Seibert spends all his time thinking about.”

My seedling already having grown a little, I posted the idea on our intranet microblog in the “Office Organization” section:

“Look at this. This is what a drinks fridge at Google looks like. The fridge doors are partly obscured by frosted glass. At the top (in the transparent section) you can only see water. The idea is to make people consume more water and less garbage (cola, Red Bull, sugar-saturated sodas, beer, etc.). I’ve already spoken to the WeCare4You team and we also thought about giving the film a particular design. Here’s the task in Jira: https://jira.apps.seibert-media.net/browse/PONY-1565

What do you think?”

That a selection takes place is also part of the innovation process, of course. There always has to be a struggle for good solutions and not ones that are just adequate.

The internal discussion started no sooner than I’d published my refrigerator post, which is only meant to serve as an example here. In my view, the course of the discussion was entertaining and instructive. I made a (very long) screenshot of it; the names are all anonymized, of course, but everything else is in the original. I’ll send you the link in Telegram as well: https://seibert.biz/kuehlschrankdiskussion.

I mention the story about the frosted glass because it’s so simple and straightforward and because the change actually seemed natural to me. And there are lots of drinks fridges in many companies. I would never have dreamed that such a lively and entertaining discussion would take place about something so mundane.

The central point that ultimately “killed off” the idea was that we get our water from dispensers. They were purchased at the initiative of employees – after many microblog discussions about why we needed water dispensers that cost as much as a small used car. Since then, our drinks refrigerators haven’t contained any water bottles. In addition, it was mentioned on several occasions that Google is fairly intrusive and childish in its treatment of its employees if they think they can influence consumption in some way. It’s well worth reading the discussion!

So why am I harping on about this example for so long? Well, I think it’s so fitting because a conversation with my brother made me understand that it’s actually a perfect demonstration of life based on agile values.

“Fail fast” is a saying that’s often used to describe iterative learning in an agile environment. If you recognize your mistakes and wrong turns early on, you can also change direction early on and at a lower cost.

This finding is particularly relevant in connection with innovation. As you know, most ideas are simply not good. Depending on where you read them, you'll find that only one in ten ideas have any real potential. An innovative company, therefore, is always interested in bad ideas dying out quickly, because then nobody has to deal with them anymore. So, in the end, nobody had to design the films. Nobody had to attach them to the fridges. And nobody had to change the way the refrigerators are filled, and therefore think about how to explain to someone that the now non-existent water bottles have to be placed on the top shelves. And we no longer had to argue about the possibility of offending or patronizing adults.

In some ways, I’m pretty happy about where my fridge idea ended up. Since it’s now dead in the water, I’ll quickly delete the Jira process I set up in the microblog post and move on to another example.

But before I do that, I’d like to emphasize the importance of microblogs as a channel on the intranet. I’d started to tout my idea for the fridge film in a chat. Although this is where I received the initial approval for the idea, it was dumped later on in the microblog. Interestingly, one of the people involved in the microblog discussion was also a member of the chat group but didn’t make any comment there. Why not? To understand this, we need to compare the two different formats: group chat and microblog.

Link to this page: https://seibert.biz/intranetbookconceptsinternally

Foster collaboration and strengthen communication. Be effective with enterprise intranets mobile and in the cloud.

Virtual Collaboration in Companies: Social Intranets as a Digital Home

Never before has the business world been so overrun by cloud software and specialized vendors as it is now. There is so much software out there that it is becoming increasingly difficult to keep track of things. It is all the more important for the future of work to have a place for digital meeting - a reliable home port meaningfully networked with numerous other systems that makes it quick and easy to navigate. This will increase transparency in the company and make collaboration more effective. Based on many years of experience, this book tells you how it already works in today's digitalized world and which trends you probably should rather than shouldn't follow.

Martin Seibert was 17 when he founded the software company Seibert Media. Twenty-four years later, it has nearly 200 employees and generates 35 million euros in annual sales. He has been sharing his enthusiasm for technology in YouTube videos for many years - and now also in his new book about social intranets.