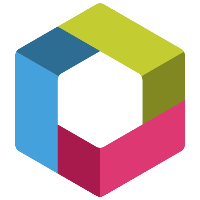 All views and information are immediately accessible via the Agile Hive menu in the Top Navigation Bar.
The Agile Hive menu updates itself automatically based on the settings made in the project hierarchies, which are maintained by Jira administrators.

Click on the Agile Hive menu so that the fly out appears.
Here you can directly access the views provided for each SAFe level. The layers use different colors for better differentiation. These colors can also be seen in the context tab of your Story.
The illustration shows a full SAFe configuration with four levels. To access a team drill down to the Team Level and select the desired team. 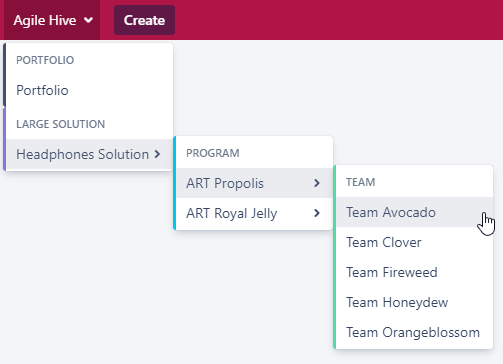 The Agile Hive Team Reports show an automated view of all relevant information about a team in a specific PI.

You can access the reports in the following ways:

The Agile Hive Team Reports consist of a PI Selection dropdown and the following five tiles which are described in more detail below: 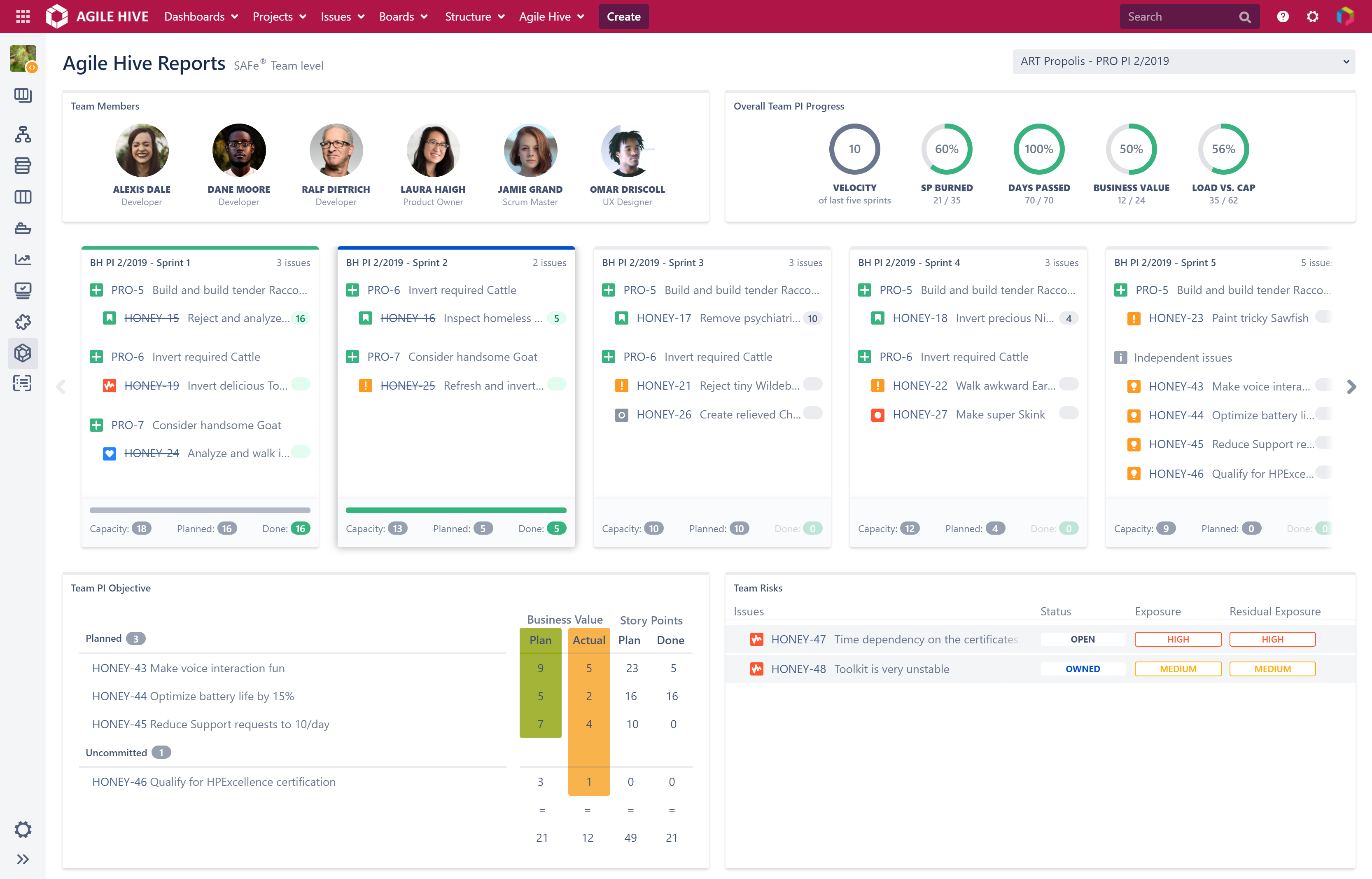 The information within the tiles is based on your PI selection. You can access PIs via the dropdown at the top right.

As soon as you select a different PI, all information within the tiles is updated based on your PI selection.

The Team Members and Team Risks tiles remain unaffected. You can also filter for PIs using the search field. 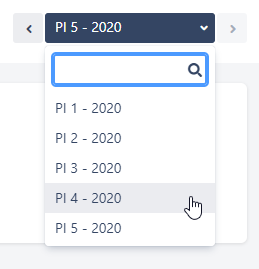 The Team Members tile introduces all team members with avatar, name and role.
Clicking on the respective avatar takes you to the Jira profile view of a team member.

You can add new team members by hovering over the tile and clicking the pen that appears in the upper right corner.

This tile shows you five easy-to-read metrics and their progress (except velocity).

The velocity of the last five sprints is shown here. It doesn't matter whether a sprint is in a past PI.

Comparison between planned and completed story points. The progress is also shown in percent.

Display of all sprints within a PI. Each sprint is represented as a single tile.

The status of a sprint can be recognized by the color of the progress bar at the bottom:

Issues planned by the team are shown indented (for example HONEY-15, 19 or 24). The respective higher-level issue (for example, a feature of the Agile Release Train named "PRO-5") is shown above.

If issues do not belong to a higher-level issue, they are shown under the "Independent Issue" group.

Completed issues are crossed out and the story point value is colored green.

The overall progress is shown in the footer as a colored bar. The values for capacity, planned and burned story points are shown below

Issues of the type "Objective" that have been linked to scheduled issue in the selected PI are shown here.

A distinction is made between Planned and Uncommitted Team PI Objectives. This is important because only the "Plan Business Value" of Planned Objectives is summed up.

This information as well as the plan and actual business value are set directly in the objective issue.

Stories can be linked to a Team PI Objective using the "Belongs to Objective" link. The "Story Points" column shows how many story points an objective consists of and how many have already been completed.

Regardless of the PI selected, all identified and open team risks are shown here.

In the following, we will show you the four specific risk dropdowns with their options:

With the help of a team's Scrum board, the respective team is able to plan, start and close their sprints as well as hierarchically link stories with a feature of their Agile Release Train.

The sprints are created automatically and no longer have to be created manually on team boards (manually created sprints are not supported by Agile Hive).

Kanban teams that are working with Kanban boards are not supported by Agile Hive yet. 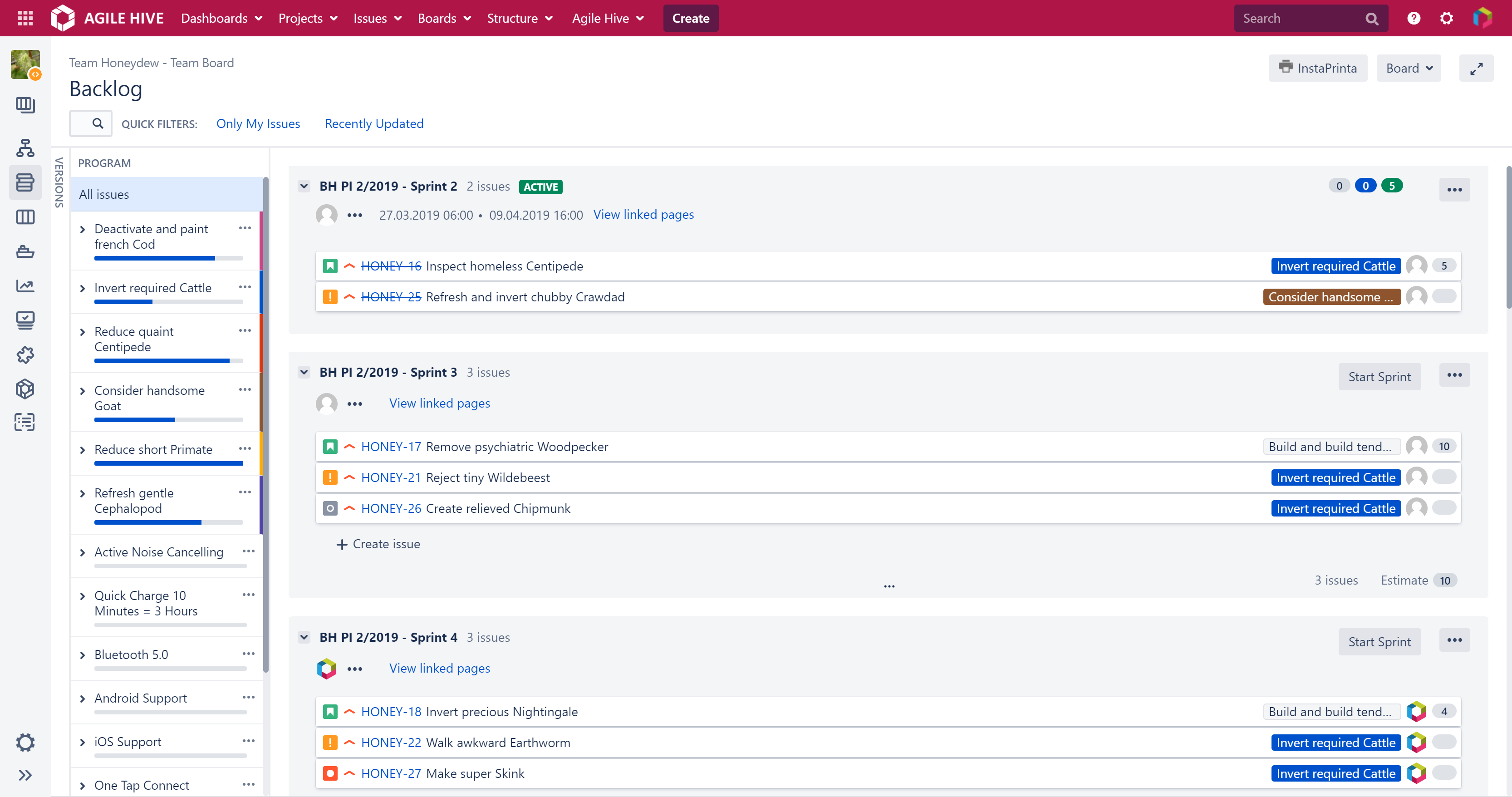 In the backlog view of a team board, you can hierarchically link stories with features from the corresponding ART using drag and drop.

To do this, click on "PROGRAM" in the panel column to open the program panel. This panel shows the features and all other configured issue types of the ART. Now you can drag and drop your stories onto a feature to set the hierarchical link.

Then the relation is shown in the story (AVO-30) as Lozenge (Refresh gentle Ceph...):

If you have linked to the wrong feature, you can simply drag the story again to the correct feature.

Of course, you can still link issues using the standard link button. 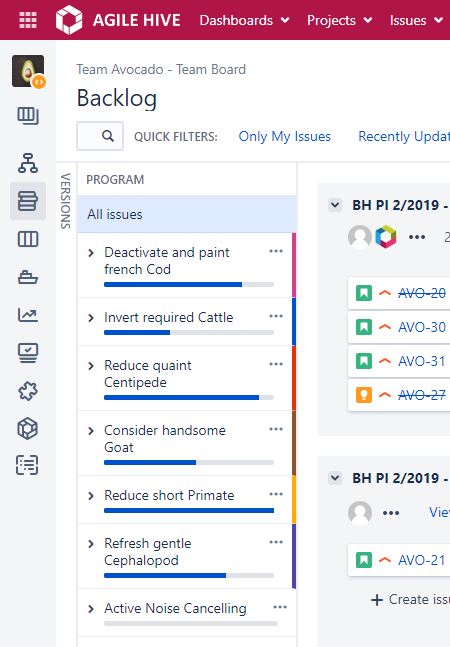 If issues have been linked hierarchically, this can be seen in the respective issues via the context tab.

All parents are shown and at hover also the SAFe levels. 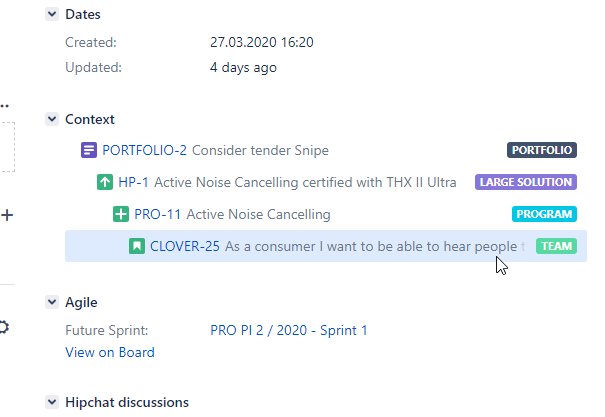 Every Jira issue can be printed out with Agile Hive - either individually, in sprints or based on a JQL.

This function is used both during PI planning for the analog program board and in teams that generally want to work with analog boards.

Open the desired story and click on the InstaPrinta button on the right.

In the InstaPrinta Print Wizard, select "Agile Hive Story" as the template and either click "Save as PDF" or, if set, click Print.

Open the "Active sprints" view of the desired team and click on the InstaPrinta button on the right.

In the InstaPrinta Print Wizard, select "Agile Hive Story" as the template.

In the selection field you also have the option to print only issues that are in a certain status.

Open the "Backlog" view of the desired team and click on the InstaPrinta button on the right.

In the InstaPrinta Print Wizard, select "Agile Hive Story" as the template.

In the selection field you also have the option to select which sprints you want to print. 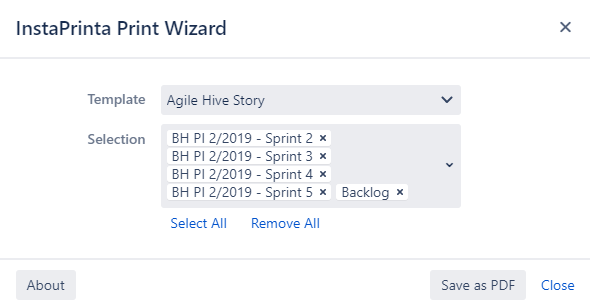 Print issues based on a JQL

Open the Jira search, insert your JQL and click on the InstaPrinta button on the right.

In the InstaPrinta Print Wizard, select "Agile Hive Story" as the template and either click "Save as PDF" or, if set, click Print.

The following Jira issue types for teams are delivered as standard with Agile Hive (of course, jira administrators can edit the standard configuration.):

To create one of the above issues, click on the "Create" button in the top navigation bar. Make sure in the "Create Issue" dialog that the desired team project is selected.

Based on the issue type selection in the dropdown "Issue Type", the fields displayed in the form below may vary.

Example: Only risks contain typical risk fields such as impact or probability.

After the issue has been created, it can be found in the team's backlog view. 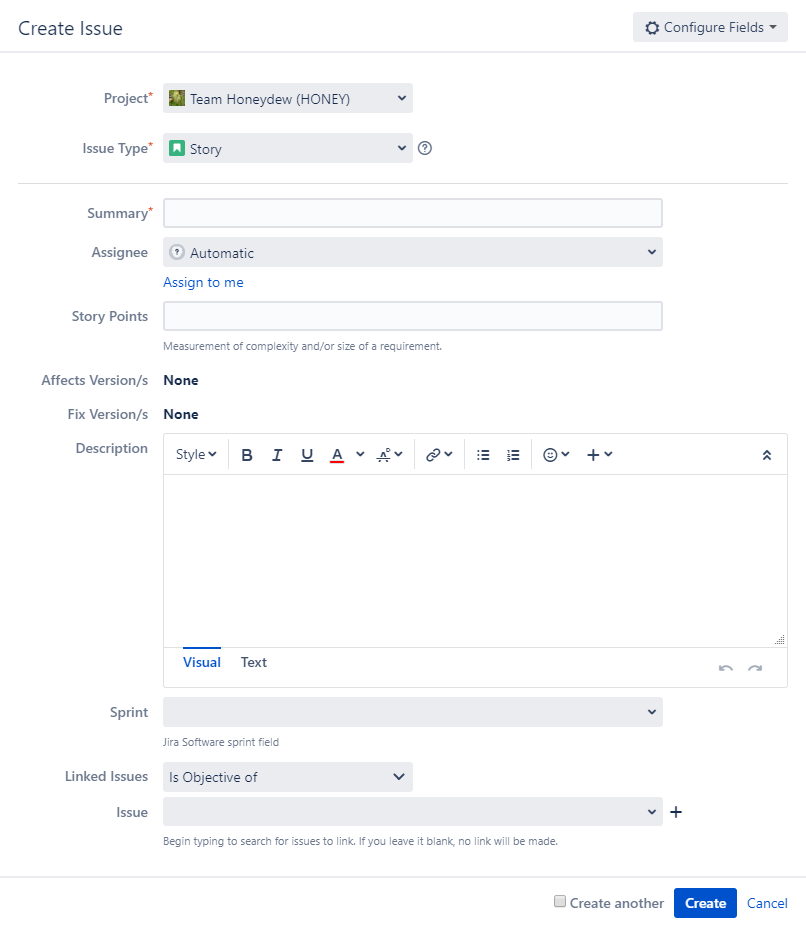 Follow these steps to open the Team Breakout view:

This view is designed to facilitate a conversation between two or more teams, working out how best to schedule work based on the desire to fulfil the Feature outcomes of the Increment.

Setting Sprint Capacity on the Team Planning Board

The planned and set capacity can be found beneath each Iteration's name.

Adding estimates to stories planned in a Sprint will roll the total number of Story Points planned to the top of the Sprint.

Open the sidebar to see the top 10 Features from the Program Backlog. These are sorted by WSJF so that the most important Feature is always at the top. The Features can be assigned to the team via drag and drop and will be displayed as Feature Lanes.

In the background, this has the effect that in the feature itself, the fields 'Teams Involved' and 'Program Increment' are automatically filled with the corresponding values by Agile Hive.

Other teams can still assign these assigned features to themselves in their Breakout Board. A corresponding indicator is then displayed.

Move Features back into the Program Backlog

If you hover over a Feature Lane, a ... menu appears, with which you can move the feature back into the backlog program. This only works if the feature lane does not contain any issues.

In the next step we break these features down into stories.

There are two options for breaking down a feature into stories. We recommend option 1 as it is much faster and easier.

Stories that have already been inserted within a Feature Lane can either be moved to another iteration using drag and drop or even assigned to a different Feature.

Agile Hive displays dependencies visually in the Program Board and the Breakout View.

You can set dependencies with the Agile Hive Dependency Link:

You can filter the visibility of depedencies via the [...] button. 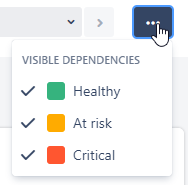